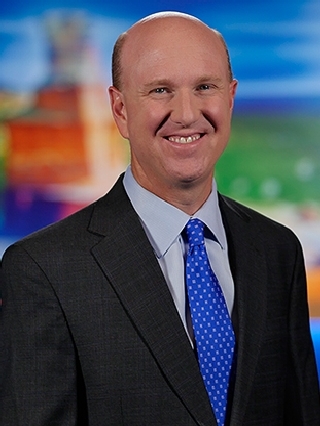 Hi! Thanks for taking time to learn more about me!

I'm a native Texan who was born in Winnsboro, but grew up living in Sherman and Clifton. I graduated from Texas A&M where I met my wife Kristy, who is from Albany, TX. Kristy and I have two boys, Carson & Caleb.

I've always wanted to be a TV meteorologist and my Mom recorded me doing the weather on the wall of their kitchen with a yardstick talking about "tormadoes" and "thummerstorms" coming down from Oklahoma into Texas back when he was 2 1/2! My TV career started in Waco working weekends for KCEN-TV while still a junior at A&M in 1990. After graduation, I worked a few more years at KCEN, then moved to KWTX-TV in Waco until 1995, when I left to be the new chief meteorologist at KTXS-TV in Abilene. In 1997, I got the call to be the weekend meteorologist here at KVII-TV and was promoted to Chief Meteorologist in April of 1998. In 2012, I was asked to move to mornings and I gladly accepted and have enjoyed the pace and fun of Daybreak from 5-7am weekdays! In 2015, I moved back to doing the 5,6,9 (CW) & 10 p.m. weathercasts and I get to "sleep in" a little later now.

I'm most proud of Storm Search 7's SchoolNet, which I helped create in 1998 with 45 weather stations installed throughout the viewing area. Now, SchoolNet has grown to more than 190 stations and continues to grow each month. I believe SchoolNet is a "win-win-win" situation for students, teachers and viewers of Channel 7 in that the students get a "hands-on" learning tool whereby they can learn meteorology, geography, simple math skills and earth science. The teachers have a way to teach these skills to their students in an exciting way and also have a way to meet certain state of Texas teaching criteria for their classes. Viewers of Storm Search 7 get to see their town's weather data LIVE, like never before! I also install and maintains Storm Search 7's SkyCam Network, which now has over 30 SkyCams and is growing daily! No other TV station in Amarillo has as many SkyCams spread throughout the High Plains!

I've served previously on the board of the March of Dimes here in Amarillo, on the Board of Directors for the High Plains Retreat Center, formerly known as the High Plains Baptist Encampment, located just northwest of Canyon. My family and I are active members of First Baptist Church of Amarillo, where I teach Sunday School. My wife works in the Perkins Center, an outreach of the church that feeds and clothes the homeless in Amarillo twice a week.